The Star Wars Universe has long been loved by millions of fans across the globe. Whether games, comics, books or other media, we could not get enough!

With Shadows of the Empire, Lucasfilm released a marketing plan designed to discover if there was still interest in new movies. They produced a novel, video games, comics, toys and various other merchandise. It even got its own soundtrack, composed by Joel McNeely. All done through the Expanded Universe.

And the fans answered like we always will for the Expanded Universe, allowing Steve Perry's novel to reach 5th among fiction books and 10th among paperback fiction on the New York Times Bestseller List.

To get to the heart of why this is, we thought we would ask the fans to make personal messages to Lucasfilm, telling why the wish to see the Expanded Universe continued. The following are just a few of the responses.

The Star Wars Universe has long been loved by millions of fans across the globe. Whether games, comics, books or other media, we could not get enough!

With Shadows of the Empire, Lucasfilm released a marketing plan designed to discover if there was still interest in new movies. They produced a novel, video games, comics, toys and various other merchandise. It even got its own soundtrack, composed by Joel McNeely. All done through the Expanded Universe.

And the fans answered like we always will for the Expanded Universe, allowing Steve Perry's novel to reach 5th among fiction books and 10th among paperback fiction on the New York Times Bestseller List.

To get to the heart of why this is, we thought we would ask the fans to make personal messages to Lucasfilm, telling why the wish to see the Expanded Universe continued. The following are just a few of the responses.

I am imploring you to continue the Star Wars Expanded Universe under the Legends banner. For 40 years, Star Wars books, games, and comic books have delighted and engaged people of all ages, beginning with the novelization of A New Hope in 1976. I have loved Star Wars my whole life. I was only one when the first movie came out, so I don't have the seminal experience of "seeing it for the first time." It's always just been there--in the background at first, as part of my childhood and American culture, and since I was 14, in the forefront. I played with the toys, colored the coloring books, drank from Star Wars cups, and played Star Wars with my friends (I was always Leia). I read the limited number of books before the Star Wars universe exploded with Timothy Zahn's Heir to the Empire, and shortly thereafter, Dark Empire. After that, there was no going back. There was so much to explore. So many backstories, so many side stories, and of course years of further adventures. And it's not all told yet. Not only are there infinite areas to explore, but there are avenues that were just cut off. I'd like to know more about Lanoree Brock and the Dawn of the Jedi era. Jaina Solo's story was ended mid-stride. There are thousands of years to cover and thousands of characters to get to know, and I hope you can make that happen. The picture I am including is my Expanded Universe collection, amassed over 25 years. 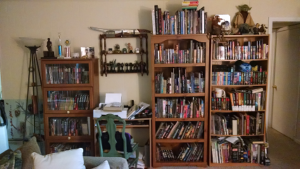 And it's not complete. There are several books that have wandered off, some that are still in my old bedroom at home, and hundreds of comics that I need to catch up on I'll need a fourth bookcase to hold them all. This is what was lost when the EU was decanonized. I understand the premise that I can still read these books--that they haven't been taken away from me. Of course that's true. You'll get no argument from me. But it's static now. There will be no more unless you make it happen. I want it to continue to grow and expand and change. I want new insights on old characters. I want new characters to love and hate and admire. I have gained so much inspiration from these books, particularly from all of the strong women portrayed therein. Leia and Padme were excellent role models for girls, but the explosion of strong female characters--both heroes and villains--in the EU was unprecedented. I have lived and loved and died with these characters. The quality of books varied, but there are none that I dislike and a vast majority of the writing was far above average. I hope to see many of the EU authors re-engaged for further stories. They work well together and know Star Wars. They, along with Leeland Chee, can keep the story consistent and flowing as they have for so long. Every time I discuss a book or comic with my fellow EU fans, or tout the series to others, I marvel at how amazingly consistent the story has been over the course of hundreds of creators and stories. A game will have repercussions in a later novel. Or a comic book will explain what's behind an offhand remark in a kid's book. It's mindblowing how interconnected everything was. You have a huge fanbase out there that is waiting for more stories. Your Disney canon can exist side by side with the universe that has lived and grown for decades. Please continue the Expanded Universe. Thank you

I have been a fan since seeing The Phantom Menace back in 1999. After which I have seen each movie in the order they happen in story. Once the credits rolled on my first time watching Return of the Jedi, I was wondering what happened before, in between, and after the movies. Hence I discovered an incredible book called Heir to the Empire. This was the beginning of my love for the Expanded Universe. Since reading Heir to the Empire, I have collected books, comics, and games all telling the story of Star Wars. ( I'm not anywhere near having the complete EU, but still working on it.) The Expanded Universe gave me an appreciation for rich story-telling, world and character building as well as reading in general. Now I read more than I do much of anything else. Thank you to George Lucas, who introduced the world to Star Wars, and to the authors who built upon his universe.

Thank you for taking the time to consider us. I have been reading the EU since I was thirteen, I am now twenty-four, and it has made a huge difference in my life. Mara Jade has especially been an inspirational character for me. Through all challenges I've faced she has inspired me to keep fighting. All challenges she faced she always found a way to overcome them, I have always strived to follow her example. Jaina Solo in the NJO has also been a great inspiration, to be able to relate to her in her teen years and as she matured into a young women gave me a compass to follow as I too matured. To have these powerful and inspirational stories end is saddening. I understand the recent decision to separate the EU and canon, but I think it would be very fruitful for Lucasfilm to continue these stories. We yearn to see the stories of these characters continue. To continue to brighten our lives with their unending plight to save their people and bring peace to the galaxy.

I do want to say that I LOVE what you did with The Force Awakens, I like that you brought in aspects of the expanded universe. I hope it continues, either way I have much faith in all of you that the fandom I love will continue in an ever strong direction. There is one thing I would like to suggest. As you make the stand alone movies, I think it would be cool to make a line of movies based on the EU. I'm talking about completely bringing the books to life as an alternate universe. They can be released under the "Legends" title as well. Heir to the Empire can be a great place to start and the Thrawn trilogy could act as testers to see what reactions you get from the fans. If the Thrawn trilogy goes well, then make more leading up to a live action TV series (like you promised back in 2008) based on the New Jedi Order. I've always dreamed of seeing the books brought to life and I don't believe I am alone. I know that is a lot to ask for, but if you find yourselves out of ideas for Star Wars movies this may work. I know that the EU fans would be very happy to see their favorite characters and stories from the EU brought to life. I think fans would understand the difference between canon movies and Legends movies. This may be a dumb idea, but I do thank you for taking the time to read it.

Regardless of what you do I know I will always love Star Wars and when I have children they will be third generation Star Wars fans and there will never be a shortage of movies and books for them to discover. Thank you for all that you have done. Please never stop making new Star Wars.

Crystal Peros
I'm in for the long haul with Star Wars. I'll be there for all the new movies, and I'll watch the TV shows--all the while thankful that Disney is committed to keeping Star Wars on the screen. But if we can also get to read more about the characters and places many of us have spent so many years invested in? Well, that will be a match made in a galaxy far, far away.

Please continue the original Expanded Universe. I really want to give you my Imperial Credits, but you're not letting me.

I was born in the GDR, aka behind the Wall in eastern Germany, where a movie like Star Wars was not shown officially. My father was a big Sci-Fi fan and grew up with guys like S. Lem and other great writers. He went to see ANH in the early 80s in Hungary in English (hardly speaking proper English -they were not too keen to teach it behind the iron curtain ;) with Hungarian subtitles. (A language he did not understand at all.) That's how deep his interest and enthusiasm went. Something he passed on to me and my younger sister.

The first VHS we bought after the wall had come down and we had bought the proper equipment, was Star Wars...and subsequently, we also bought some books that supposedly continued the saga. It was Timothy Zahn's brilliant trilogy, which still ranks among my favourite books till this day. Needless to say, that I now, aged 33 own many more EU books and fondly remember discussing said books with friends, roleplaying and awesome computer games like the Jedi Knight games.

While I was elated to hear that finally there would be episodes 7-9, I was sad it would not be the universe, I have come to love and share with my family these past 23 years. I was still invested in the books, though, those characters I had laughed, cried and lived with for so long: Mara, Jaina, Jagged, Thrawn,...to find out their stories will not be continued made me angry at first and then simply very sad. THEY DESERVE AN ENDING and a proper send-off.

We tried to give one during the TFA premiere at our local cinema. Us, that's my sister (the ewok), my brother in law and me (as my favourite EU character). 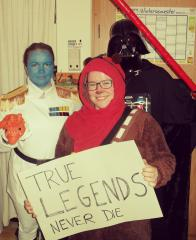